Burma was under a military government control since 1962. No foreign activities were allowed in the country during that time. For 18 years we prayed for Burma and during that time we organized several Bible Schools for Burmese refugees who had settled in India. In 2010 the Iron Curtain fell and Burma opened for the Gospel. The country changed its name and became Myanmar.

In the year 2018 we went to Myanmar and organized our first Bible School for 24 students. Now in 2019 we were able to enroll 40 students. The Lord has opened the door to Myanmar. Let us use this opportunity and bring the Gospel to this nation. Support our ministry in Myanmar. The harvest is plentiful, but the workers are few. Ask the Lord of the harvest, therefore, to send out workers into his harvest field. (Luke 10: 2) 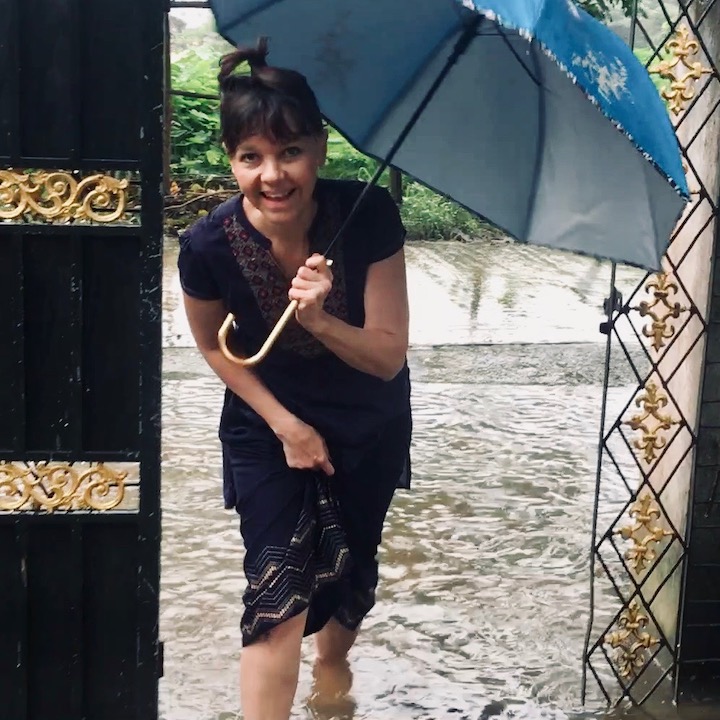 Come to Myanmar, but do not forget to take an umbrella! In June, it starts raining cats and dogs. At the same time, we begin our Bible School called Walking on Water (WOW). And yes! During the rainy season, we literally walk on water. The Burmese say: “The monsoon has started… and it will end in September.” Then we wink at our Burmese friends and joke with them, “The flood has started… and we will finish swimming in September!” 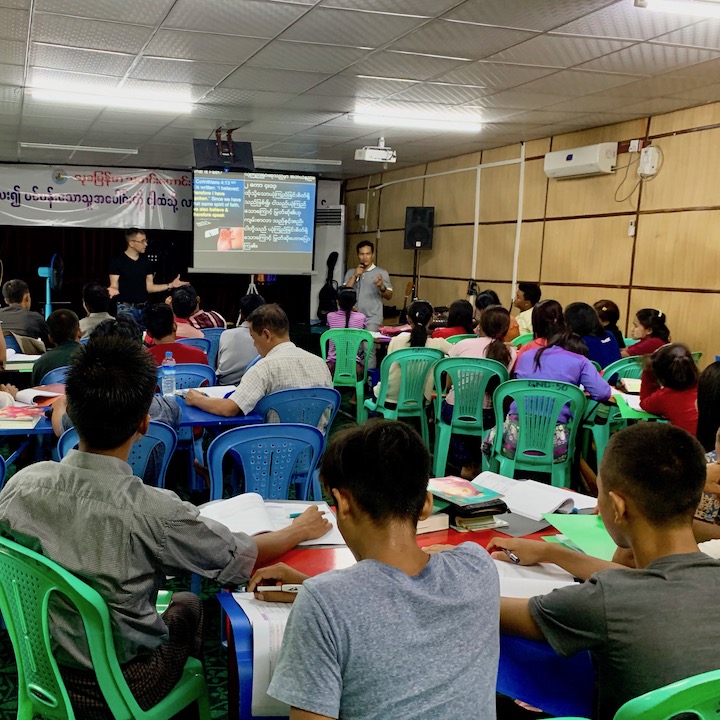 Take a look at our classroom. This year we were able to enroll 40 students. Students were listening with great attention. Pastors and ministers who attended our school last year came again to sharpen their skills and grow in knowledge. New pastors and missionaries came to our Bible School from remote villages where there are no believers. Other students told us that they plan to start new ministries after they finish our training. We taught our Burmese brothers and sisters how to live by the Word of Faith, and how to overcome during times of trouble and persecution. 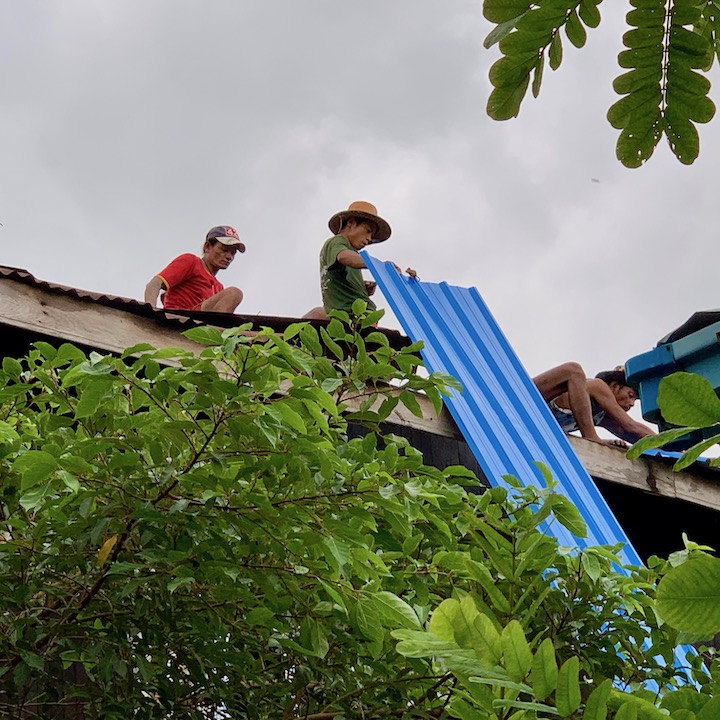 Tropical rain was pouring out non stop. The sound of the rain was so loud that we couldn’t hear our own voices. The building where we gathered was very old, and the tin roof was all rusted and worn out. The water started to leak through the roof and flooded the classroom! I am not kidding, we’ve never seen in our life a roof that leaked so bad. Now tell me, how are you supposed to teach when the water is dripping right on the top of your head?

All of the students were patiently moving their tables trying to save their textbooks from the water. They brought the buckets and put them everywhere. That was the most chaotic training session we’ve ever had! The next day we called a contractor. They urgently repaired the roof and installed additional ceiling with thermal insulation. The rain did not refresh us, it only brought humidity. We were exhausted from the heat, and all the students were sitting very tired without energy. We had to buy and install air conditioners. But the power supply station burned down in our area. So during the whole month we had no power supply for up to 5 hours every day. 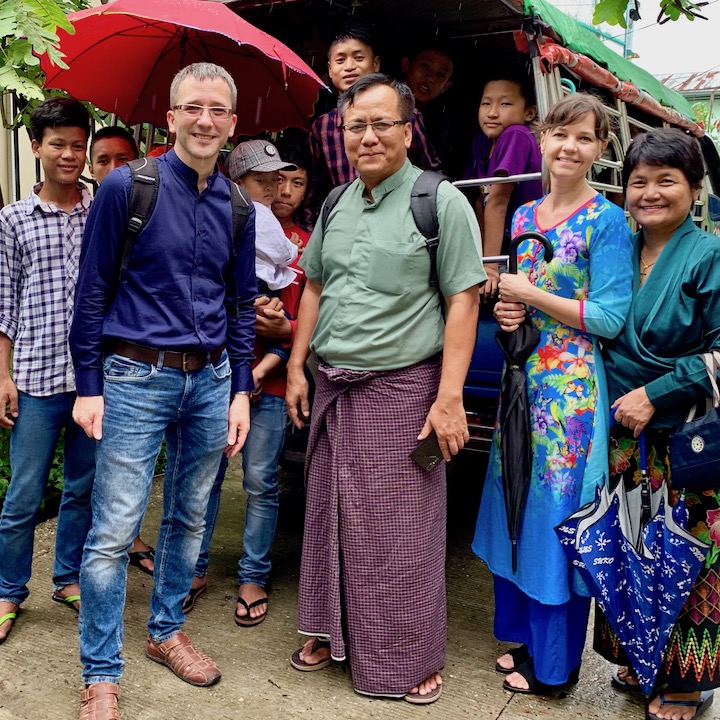 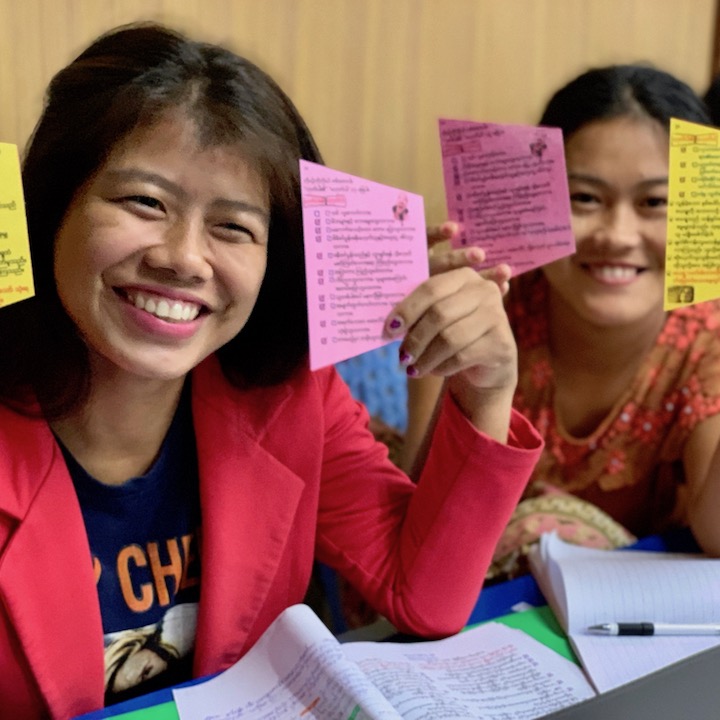 We taught students how to share about Christ using colorful tools and fingers. We divided the students into groups, and they preached on the streets of the huge city of Yangon, which is filled with Buddhist temples, stupas, and monasteries. A few days later, our books about Jesus made their way to the desks of the local authorities. Then Pastor Khaihmo’s phone started ringing.

We were accused of illegal activities. I tell you the truth, this is a serious accusation. Since 1962 Burma has been run by the military government, and no foreign activity was allowed in the country. But in 2010, changes came to the country. The door was opened for the Gospel and the country changed its name. Now Burma is called Myanmar. But in Myanmar, Christians are still persecuted. Churches are still being bulldozed and replaced with Buddhist temples.

The former military officers ordered us to go through the neighborhood and find out what people think about our church. Local authorities said, “If the neighbors are not against your meetings, then bring 30 signatures from such people to our office.” For this reason, we went to every house near the church. That is why another 30 families have learned where the Christian church is gathering. Pastor Khaihmo collected 30 signatures and brought all the papers to the administration.

But the authorities said, “We are Buddhists. Christians are not allowed to gather here!” They promised to come and stop the Sunday service, but we prayed and no one came. The church continues to preach on the streets of the huge city of Yangon. The church continues to worship Jesus. Well, how can we not remember the words of Christ in Matthew 16:18? “I will build my church, and the gates of hell will not prevail against it.” 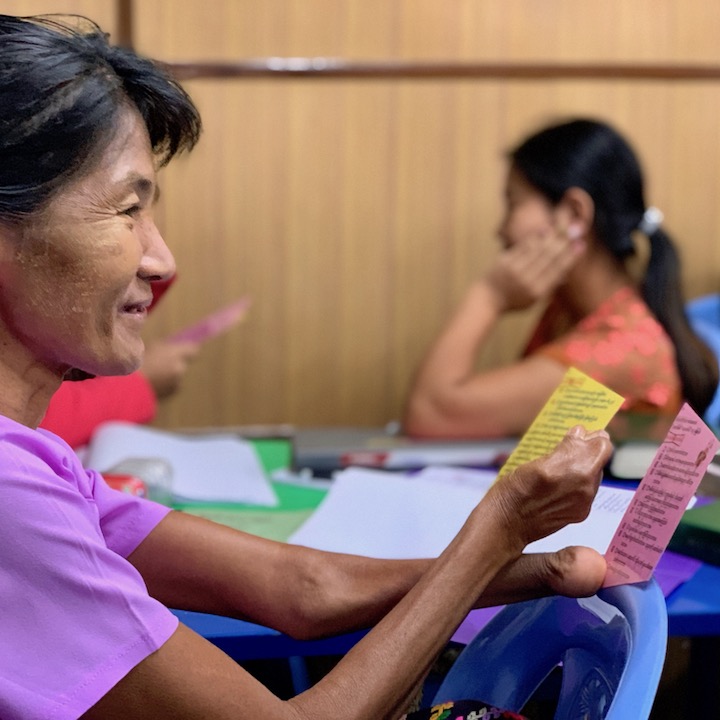 Let me introduce you to Mathu. She is one of our students. Look at her hands. Mathu was born without fingers. Mathu was born without feet. Listen to what she says: “My parents loved me. But when they died, the family kicked me out of the house. After that, for many years I lived in the garbage along with dirty pigs and stray dogs. I did not understand why I needed such a worthless life? I tried to commit suicide a couple of times. But one day I met a believer, and he told me about Jesus.”

As time went by, Mathu grew up in the knowledge of God and His truth. Do you know what happened next? Rumors spread throughout the village – “Mathu is getting married! Wow, really?! That Mathu who was born without feet, who has no fingers, and who now prays to Jesus.” After the wedding, Mathu opened a shop in her village, and now she sells rice, beans, and chips. But her story did not end there. Mathu became a pastor in her village church. Just listen to what this woman now speaks about herself: “I’m so happy! I live for Jesus, He gave me a new life. The real life.”

Mathu already studied twice in our Bible school, and we are always amazed at this woman. Along with all the other students, she writes down what she hears in a class with her own hands. Yes, Mathu can write! She holds the pencil using both of her hands and writes Burmese letters. And let me tell you, her handwriting is no different from other people’s handwriting! Mathu writes neatly and quickly. All the letters stand next to each other, and none of them falls out of line. She also stitches her own clothes. No, she doesn’t have a sewing machine. But she has needles, threads and a passion for life that Jesus gave her. 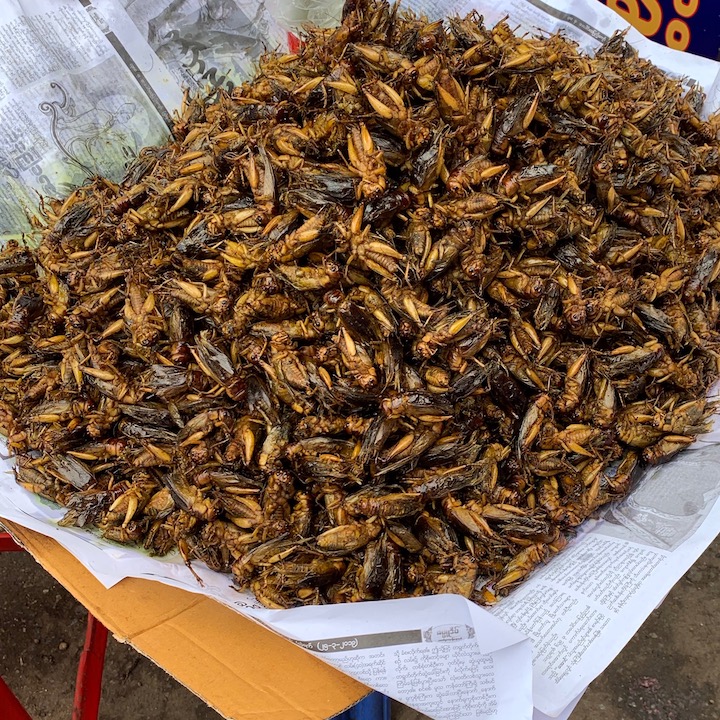 We went to the market, and for the first time in our life, we ​​saw THIS. A pregnant woman covered her tray with a newspaper and put a huge mountain of the deep-fried cockroaches there. And I sniffed scornfully, “Ugh! How do people eat this? Brrr! ”

We asked the locals: “What are the names of the insects you fry?” But they could not find the correct word in English, so we concluded that the Burmese eat locusts, crickets, grasshoppers and huge cockroaches. We also have huge wild cockroaches in India, and they can grow up to 3-4 centimeters (1-2 inches). They crouch down the streets and you can hear them making noise at night around the house. But Indian cockroaches are lucky because Indians are vegetarians.

Well, how can I explain what does this dish taste like? Imagine crunching chips. Imagined? But these chips are not salted, without spices, and one more important detail – these chips are made of huge cockroaches. These insects are deep-fried, so the favorite dish of the Burmese has a strong taste of the fried vegetable oil. It was strange for us that the insects were cooked without any spices and even without salt. Brrr!

By the way, open in the New Testament and read the Gospel of Mark 1: 6, “John wore clothing made of camel’s hair, with a leather belt around his waist, and he ate locusts and wild honey.” Remember? John the Baptist ate locusts.

“Well, that is it. Lana ate a cockroach! ”- declared my husband. Yes, I ate a large cockroach, which our students bought on the market and brought to us. But at first the Burmese deep fried a cockroach, and only after that, they offered this delicious dish to us. No, they were not making fun! The Burmese people are similar to Chinese regarding what they eat. They love rice, and they eat everything that flies, jumps and crawls.

Our Burmese friends joke: “If Adam were a Burmese, then the history of mankind would have evolved differently. The snake would be on the grill, and then in the stomach of Adam!”

Oh, woman! You do not know what you are capable of until you find yourself among the Burmese. Especially for us, students of the Bible School bought ten fried insects at the bazaar. I took the roast cockroach and looked into his big eyes… How can you put this in your mouth? But the Burmese did not look at the “face” of the insect, they were happily crunching wired chips. And I convinced myself – millions of people LOVE it. Maybe I will like this too?

Okay, here we go! And I bit off the cockroach head… Surprisingly, the taste was not bad at all! No, it did not shock my taste buds. But my emotions went off the scale! And my husband said: “Lana ate a cockroach! What else should we expect from this woman?”And my mother shouted into the phone: “Oh my dear, why did you eat a cockroach? I brought you up differently!”

The word solidarity is the right word, and it is appropriate for this situation. That’s what Bible School students said when they saw that I was eating their favorite dish: “Finally you became like us!” People, tell me, would you try cockroach chips? But I promise to my mom: I will no longer eat cockroaches, grasshoppers, crickets, or locusts. Nothing! One time was enough… 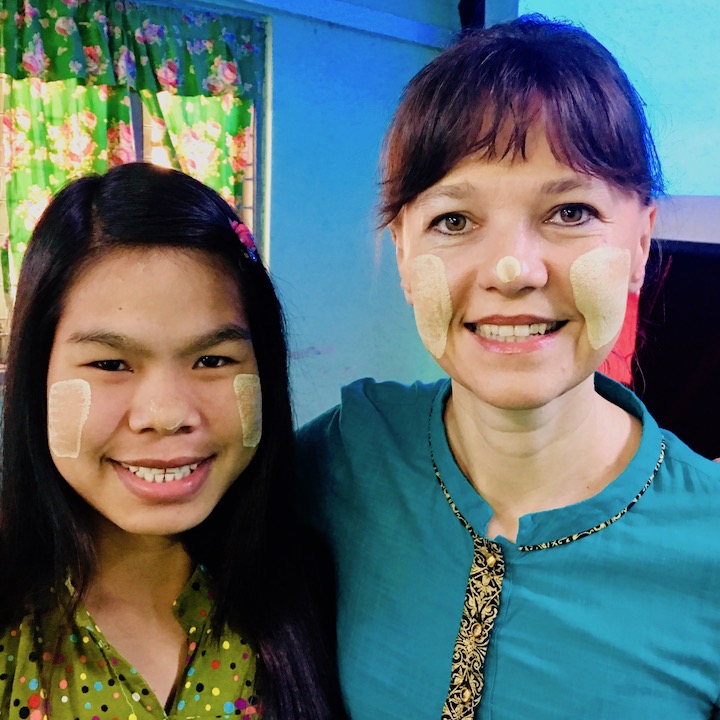 Just look what kind of great makeup we have! Burmese women apply the yellow paste on their face, which is called thanaka. Women chop the bark off the tree, add some water there and make a paste. They apply it on their forehead, cheeks and nose. They believe thanaka protects the skin from the sun. And, well, it’s just beautiful! 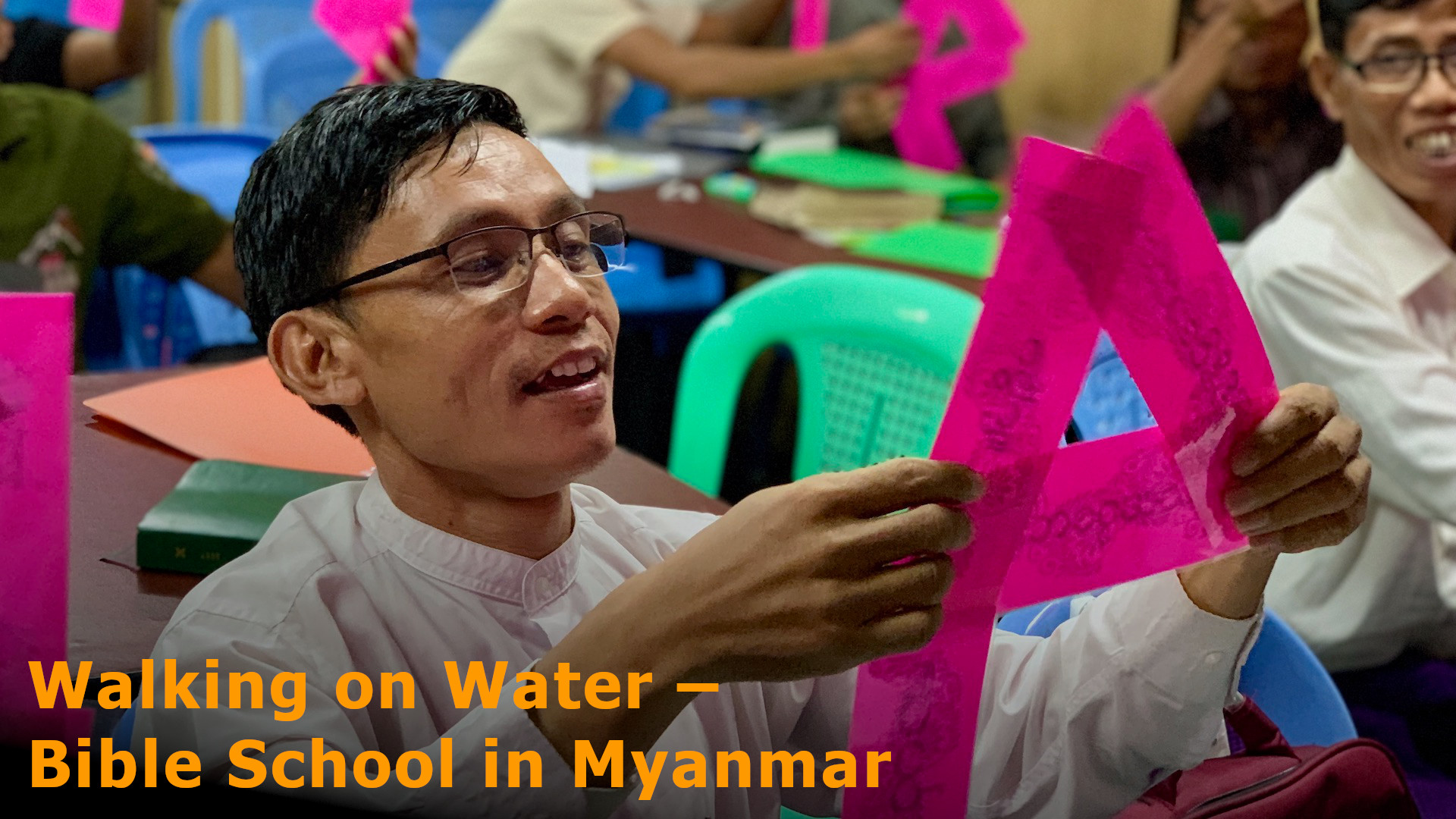 Last year, this pastor was attacked by Buddhist fanatics. They smashed his head, and everyone thought he would die. Miraculously, he survived! Today he is as healthy as can be, there are absolutely no consequences after his injury. The pastor told us: “During the training, I received a new vision from God and learned how to preach the Gospel in a creative way.” 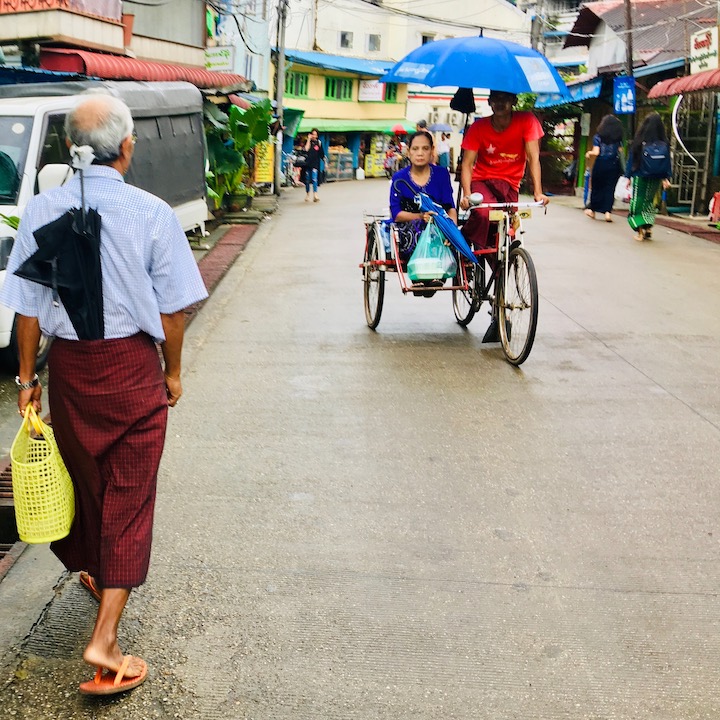 Look, a man is wearing a skirt! This skirt is called longyi. Our Burmese friends say: “Walking in a skirt is very comfortable.” But wearing a skirt has one downside – there are no pockets in it. Therefore Burmese men tie an umbrella and purse with their skirts. And that is not a good idea at all! A couple of times we saw how money fell on the road from under the skirt. Other people would see it, stop the person and return him his money. 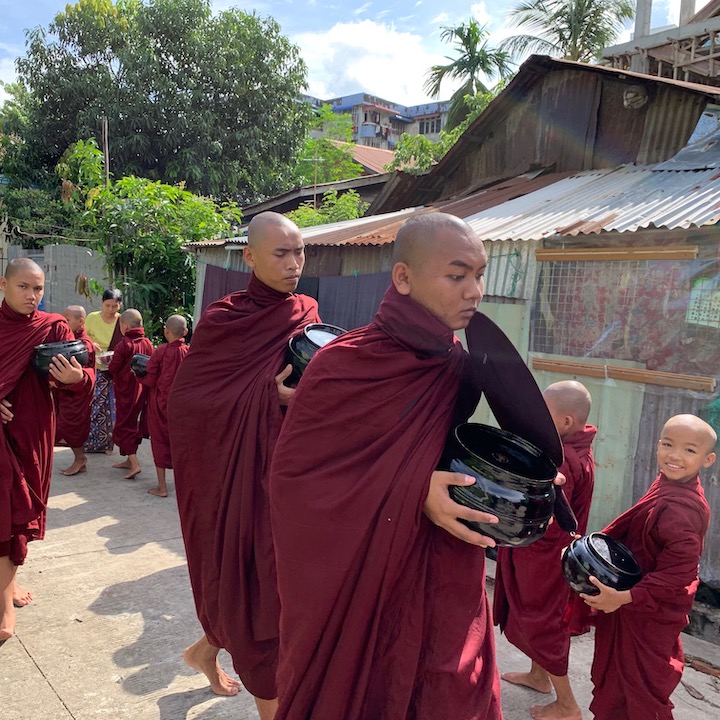 Each family must feed one Buddhist monk who lives in a nearby monastery. In the mornings, groups of 10-15 monks ring the bells at the door of the houses, and people bring out the same food for the monks which they prepared for their families. People give rice, soup, boiled vegetables as donations to the monks… At least once in a lifetime, each Burmese must become a monk and spend some time in a monastery. We talked with some monks – they are ordinary people. Monks suffer from their sins and need salvation that God gives to everyone who believes in Jesus.